Battle of Guilford Courthouse: The Fight that Broke the Back of the British Crown

On Thursday, March 15, 1781, American Major General Nathanael Greene led his army of some 4,500 militia and Continental regulars against British Lieutenant General Charles Cornwallis’s force of approximately 1,900 veteran troops at the small North Carolina backcountry hamlet of Guilford Courthouse. Fighting on the defensive, Greene split his army into three lines, placing his militiamen in the first two, positioning his battle-hardened Continentals in the final line, and post 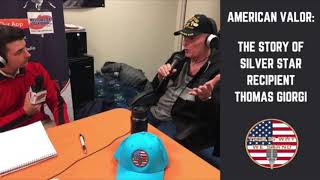 I had the great honor of interviewing Silver Star recipient Thomas Giorgi on the latest episode of This Is Why We Stand on Westchester Talk Radio. Giorgi is a terrific speaker and I can’t thank him enough for sharing the story of his service during the Vietnam War. I hope you enjoy his story as much as I did.