Stand and Fight: George Washington and the Battle of Monmouth

After a hard winter and spring of training, drilling, and survival at Valley Forge, Pennsylvania, General George Washington’s revitalized Continental Army was put to the test against British General Sir Henry Clinton’s army near Monmouth Courthouse in Freehold, New Jersey on June 28, 1778. As Clinton’s army was moving northward through New Jersey toward New York, the lead Continental elements under General Charles Lee attacked the rearguard of the British column as Washington

On Sunday, June 25, 1876, Lieutenant Colonel George Armstrong Custer led the 7th Regiment of the United States Cavalry against a sprawling encampment of Lakota Sioux, Northern Cheyenne, and Arapaho along the Little Bighorn River in south-central Montana. Confronting an 8,000-strong village rallied behind the Lakota leaders Sitting Bull and Crazy Horse, Custer was operating ahead of U.S. Army infantry, and although originally planning to attack at dawn on June 26, the 7th Cava

A Colossal Clash of Arms: The Battle of Waterloo

The great French author Victor Hugo once wrote, “Waterloo is not a battle; it is the changing face of the universe.” On Sunday, June 18, 1815, the world did indeed change forever along the slopes of Mont Saint-Jean, a few miles south of the Belgian village of Waterloo. Separated by a shallow valley, the Emperor of the French, Napoleon Bonaparte, and his 77,500-strong army stared down an Anglo-Allied army containing some 73,200 British, Dutch, Belgian, and German troops under

On Saturday, June 17, 1775, Colonial militiamen entrenched on Breed’s Hill on the Charleston peninsula across from Boston Harbor stared down British troops led by General William Howe in one of the earliest and most significant battles of the American Revolution. After discovering that British General Thomas Gage intended to march troops out of Boston to seize the commanding high ground surrounding the city, the Americans reacted swiftly, moving to occupy a 110-foot rise on t

Honor to Old Glory and the U.S. Army

Today, we honor two of the ultimate symbols of our freedom, the American flag and the United States Army. Officially established on June 14, 1775, the Patriots of the Continental Army under the command of General George Washington gave our nation its life. Those warriors dedicated themselves completely to our nation, and that remarkable standard of service has been sustained over time by generations of American fighters. Two hundred forty-four years later, the spirit of Washi 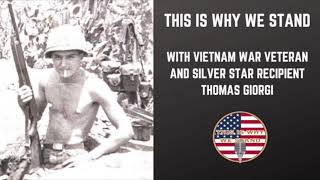 It's always an honor to be joined by Vietnam War Veteran and Silver Star Recipient Thomas Giorgi on This Is Why We Stand. On this episode, Giorgi and I discuss the 75th Anniversary of D-Day and much more. Next month, Giorgi will return to the program to commemorate the 53rd anniversary of the furious battle that he and his unit were engaged in on July 3, 1966. Forty-six years after this intense struggle, Giorgi was awarded the Silver Star, the third-highest military combat de 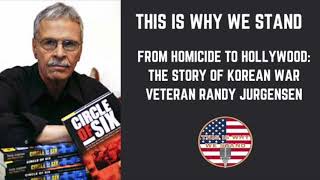 From Homicide to Hollywood: The Story of Korean War Veteran Randy Jurgensen

Randy Jurgensen served in the Korean War, received three Bronze Stars and a Purple Heart, served and protected for 20 years in the NYPD, and produced and appeared in 50+ films and television shows. On this episode of This Is Why We Stand, I had the honor of interviewing Jurgensen about his service to our nation and other aspects of his remarkable life and career.

The 75th Anniversary of D-Day

As General Dwight D. Eisenhower reminded the soldiers, sailors, and airmen of the Allied Expeditionary Force in his Order of the Day for Tuesday, June 6, 1944, “You are about to embark upon the Great Crusade, toward which we have striven these many months. The eyes of the world are upon you.” To “bring about the destruction of the German war machine, the elimination of Nazi tyranny over the oppressed peoples of Europe, and security for ourselves in a free world,” Eisenhower,