Antietam: The Fight for America's Destiny

Whether in blue or in gray, for the soldiers of General Robert E. Lee’s Army of Northern Virginia and Major General George B. McClellan’s Army of the Potomac, Wednesday, September 17, 1862 was a date on which nothing could be held back. As the warriors of those two armies stared each other down along Antietam Creek near the Maryland village of Sharpsburg, they knew, as the historian James M. McPherson writes, “that the destiny of their respective nations-the United States an 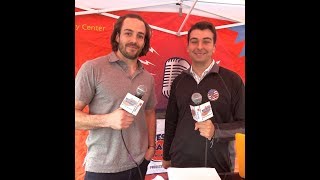 This Is Why We Stand Radio Show: Service with the Navy Seals, Army Football, Honoring the past, and

On the latest episode of This Is Why We Stand on Westchester Talk Radio, I had the honor of interviewing four remarkable Americans. I want to thank Dan Mulroy, Steven Valencia, Matthew Ricker, and Ken Kraetzer for being a part of the show. I hope you enjoy our conversations as much as I did. Dan Mulroy on his 14 years as a Navy Seal. Steven Valencia on his service in the U.S. Marine Corps. Matthew Ricker on his family's long line of service in the U.S. Military. Ken Kraetzer

On September 11, 2001, all of our lives changed forever. On that day, we experienced pain that still haunts us 18 years later. While the sorrow will never go away, our unbreakable American spirit shines on. The 9/11 terrorist attacks were designed to leave us in ruin. They took so much from us, but they also brought out the best in us. That day, every American had a common purpose to help one another. From the first responders navigating the perils at Ground Zero to the ave

Don't Give Up The Ship: Oliver Hazard Perry's Victory at the Battle of Lake Erie

“We have met the enemy and they are ours.” So wrote the 27-year-old Master Commandant Oliver Hazard Perry to Major General William Henry Harrison after defeating the British in one of the most significant naval clashes in American history at the Battle of Lake Erie during the War of 1812. On Friday, September 10, 1813, Perry led his flotilla of nine vessels with 54 guns against a British squadron of six ships and 63 cannons under Commander Robert Heriot Barclay at Put-In-Bay,

Sherman the Savior: Atlanta Falls to the Union

After a summer of bloody battles, staggering casualties, and a seemingly stalled war effort against the Confederacy, morale among the Northern public plummeted. With spirits so low and many desperate for the Civil War to come to an end at any price, President Abraham Lincoln seriously doubted that he would win a second term in the election of 1864. “I am going to be beaten,” Lincoln told an army officer, “and unless some great change takes place badly beaten.” Lincoln and the

Live to Fight Another Day: George Washington and the Continental Army Escape From Long Island

After months of preparation to defend New York City from an imminent British invasion, General George Washington and the fledgling soldiers of his Continental Army faced their first great test under fire of the American Revolution on August 27, 1776. On that Tuesday of picture perfect weather, British General William Howe unleashed his military might and Crown forces overwhelmed and routed the American troops stationed on the western end of Long Island, in present-day Brookly