To Banish the British: George Washington and the Siege of Boston - Part II

The Path of Bravery: Alexander the Great

Selflessness is the supreme virtue of the true warrior. Bravery is an extension of that supreme virtue. By accepting that the group comes before the individual, the true warrior unhesitatingly rises to perform brave deeds on the battlefield. Whether a common foot soldier or a general with thousands of troops under his command, the true warrior knows only one way, the path of bravery. Alexander the Great was a true warrior and he was a selfless disciple of that noble path. In

The Virtue of Selflessness: Leonidas and the Spartans at Thermopylae

The great Greek biographer and philosopher Plutarch asked, “Why do the Spartans punish with a fine the warrior who loses his helmet or spear but punish with death the warrior who loses his shield?” His answer, “Because helmet and spear are carried for the protection of the individual alone, but the shield protects every man in the line.” Using this example from the Spartans of ancient Greece, one of the greatest warrior societies ever to walk the earth, Plutarch reveals the u 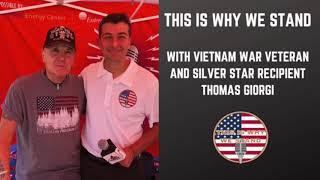 On the latest episode of This Is Why We Stand on Westchester Talk Radio, I had the honor of interviewing a familiar face, Vietnam War veteran and Silver Star recipient Thomas Giorgi. On his most recent appearance on the program, Giorgi shares his thoughts on what it felt like to commemorate the 53rd anniversary of the furious battle that he and his unit were engaged in on July 3, 1966. He also explains how sharing his experiences helped him to heal from the wounds of war. Fin 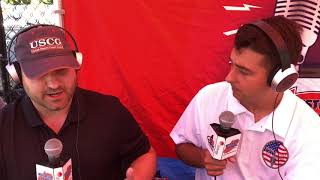 This Is Why We Stand Interview: Vets Treating Vets With Dr. Michael J. Doria

On the latest episode of This Is Why We Stand on Westchester Talk Radio, I had the honor of interviewing U.S. Coast Guard veteran Dr. Michael J. Doria about his new nonprofit, Vets Treating Vets, a telemental health service exclusively for veterans by veterans. Dr. Doria discusses the mental health challenges in the veteran community and his mission to use his experience as a licensed practitioner in neuropsychology and psychological trauma to help his fellow brothers and sis

A One-Man Army: The Legend of John Basilone

Eight months to the day after the devastating attack at Pearl Harbor, America took a major step forward in the fight against the Japanese Empire. On August 7, 1942, the 18,700-strong Marine Corps 1st Division under Major General Alexander A. Vandegrift conducted the first American amphibious landing of World War II, storming the islands of Guadalcanal, Tulagi, and Florida, which were parts of the Solomon Island chain in the South Pacific. Tulagi and Florida fell quickly to th

“Damn the torpedoes! Full speed ahead!” According to legend, so shouted Union Rear Admiral David Glasgow Farragut on August 5, 1864, as he led his flotilla of 14 wooden ships and four ironclad monitors against three Confederate forts and a small Rebel fleet defending the major Southern port of Mobile, Alabama. The ensuing clash would prove to be one of the most impactful and timely Union victories of the American Civil War. The Confederates had spread around 180 torpedoes, wh

The Virtue of Selflessness: Alexander the Great

The virtue of selflessness lies at the heart of the true warrior. Across battlefields past and present, far and wide, the greatest fighters ever to walk the earth have led by example, showing that, “The group comes before the individual,” as noted by the author Steven Pressfield in The Warrior Ethos. Among many other valuable insights in his book, Pressfield offers three stories from the life of the ancient Macedonian ruler and titan of military conquest and leadership, Alexa

Happy birthday to one of the great and often unsung heroes of American history, George Henry Thomas, born on this day in 1816 at Newsom’s Depot in Southampton County, Virginia. A graduate of West Point, distinguished veteran of the Mexican-American War, and an extremely well rounded soldier and instructor at the U.S. Military Academy, Thomas, like many other Southerners at the outbreak of the Civil War, had a life-changing decision to make. Many skilled military men in the So