To Hell and Back: The Epic Stand of Audie Murphy

On January 26, 1945, Second Lieutenant Audie Murphy and his small company of GIs watched in shock as approximately 250 German soldiers and six tanks emerged out of the woods and advanced toward their position near the village of Holtzwihr in eastern France. It was a perilous situation to be in, but at just 19 years old, Murphy had already faced it all, proving himself to be a soldier with a spine of steel in earlier fights across Italy and France. Since his boyhood days takin

A Devil of a Whipping: Daniel Morgan and the Battle of Cowpens

A renewed spirit sifted through the cold Southern air as Brigadier General Daniel Morgan and his troops stood ready for battle on a 500 yard grazing pasture called “the cowpens” near Thicketty Creek, South Carolina on January 17, 1781. Not long before this moment, the might of the British Crown had proven all but unstoppable in fights across the American South dating back to late December 1778. Just when the fight for Independence seemed to be on its last legs, however, every 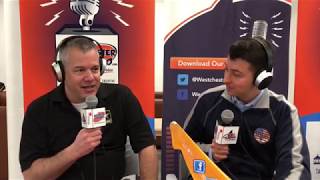 This Is Why We Stand Radio Show: The Honor to Serve, War Letters, and PGA HOPE

On the latest episode of This Is Why We Stand on Westchester Talk Radio, I was honored to be joined by U.S. Army veterans Dr. Richard Robitaille and Thomas Giorgi, and U.S. Marine veteran Janus Persaud. I thank all of these guests for sharing their stories with me and I hope you enjoy the show! I also express my sincere gratitude to Andrea Molina, Sherry Toplyn, and everyone from the Family Services of Westchester Center For All Ages. This program would not have been possible

A Debt of Retaliatory Vengeance: Andrew Jackson and the Battle of New Orleans

During his boyhood, Andrew Jackson suffered miserably as a British prisoner of war. He was scarred by the sword of a Redcoat officer and suffered the loss of his mother and two brothers during the American Revolution, leaving him an orphan by the age of 14. As he grew into a hardened warrior, Jackson was determined to exact revenge on the enemy that had caused him so much pain early in his life. "I owe to Britain a debt of retaliatory vengeance," he wrote to his wife Rachel,